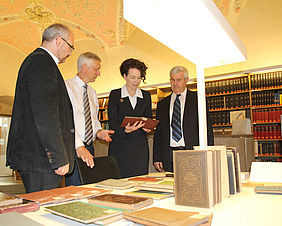 The restitutions of the works to the KRGB, represented by Father Erhard Staufer SDB, Director of Studies in the service of the Church, took place in a festive setting in the reading room of the archive of the Archbishopric of Munich and Freising (address: Karmeliterstrasse 1, entrance Pacellistrasse, 80333 Munich). The association passed on the books to the Archbishopric of Munich and Freising, represented by Diocesan Chancellor Dr. Sandra Krump, where the works will be preserved in the library of the diocese.

After withstanding the pressure of enforced conformity, the "Gleichschaltung", for as long as possible, the "Verein katholischer Religionslehrer an den höheren Lehranstalten Bayerns", was dissolved by the Nazi regime in 1938 and its possessions were liquidated. The then Bavarian Ministry of Education offered the library of the association to the Bayerische Staatsbibliothek in 1938. The BSB selected a total of 110 titles, which were incorporated into its collections. On the basis of the preserved acquisition list, 67 titles from this list could be identified among the holdings of the BSB.

Dr. Klaus Ceynowa, Director General of the Bayerische Staatsbibliothek: "Our institution is working with great commitment on returning books that were acquired unlawfully during the time of the NS regime to their respective owners. With the public restitution of the stolen works, the Bayerische Staatsbibliothek faces up to its responsibility for its involvement in NS injustice."

Father Erhard Staufer SDB, KRGB Regional Chairman, Director of Studies in the service of the Church: "The restitution of the books simultaneously casts a light on our history, which spans almost 120 years now. Looking back into the past is an encouragement at the same time to play an active role in shaping a positive future, opposing with commitment and faith in God any attempts at ideologisation also by means of religious education. For: Then and now, one of our central tasks as religious education teachers has always been helping the lives of young people thrive, without unduly influencing them and making them serve a purpose."