The Specialised Information Service for Russian, East and Southeast European Studies has acquired the digital archive of the "Novoe Russkoe Slovo" – the most important printed medium of Russian emigrants in the USA – with the support of the German Research Foundation. The archive comprises around 260,000 PDF pages which can be searched in full-text mode. 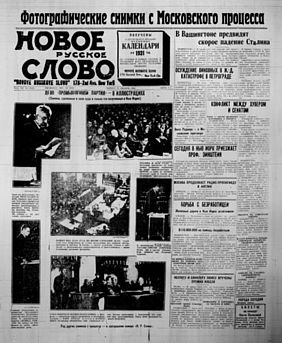 "Novoe Russkoe Slovo" was published for the first time in New York in 1910, with the Russian emigrant, journalist and writer Ivan Okuntsov as a co-founding editor. Initially published with the title "Russkoe Slovo" with clear pro-communist tendencies, a decade later, in 1920, the newspaper underwent nominal and ideological changes. The title was extended by the word "Novoe", in order to subsequently discard the pro-communist sympathies and to establish itself as the leading daily newspaper of the Russian emigrant community in New York and beyond.

In the course of its 100 years of publication, the newspaper featured articles by writers and journalists such as A. Vetlugin, George Grebenstchikoff, Aleksei Fovitsky, Ivan Bunin, Don Aminado or Arkady Averchenko. Accordingly, the "Novoe Russkoe Slovo Digital Archive" has to be considered as a source collection from which not only historical, but also cultural research can benefit.