The Bayerische Staatsbibliothek has been given a Burmese adorned manuscript from the 19th century as a present from a private holder. Palm leaves as writing material and the magnificent design indicate the Buddhist content of the manuscript. 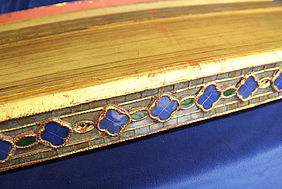 The edge of the palm-leaf block is gilded in its entirety, the upper and the lower cover are artfully underlaid with coloured glass mosaics and decorated with golden borders.

The Oriental and Asian Department of the Bayerische Staatsbibliothek systematically collects manuscripts in numerous languages of the Buddhist cultural area and is currently holding a collection of around 900 Burmese manuscripts.

The great variety and abundance of these writings was documented in 2005 by the opulent exhibition "The words of Buddha in the languages of the world".

The manuscript can fortunately still be entered in the "Verzeichnis der orientalischen Handschriften in Deutschland" (Register of Oriental manuscripts in Germany), within the framework of which the cataloguing of the Burmese writings of the library will be concluded by Dr. Anne Peters in the near future.

Further information about the holdings in south-east Asian languages