In August, the Image Archive of the Bayerische Staatsbibliothek has uploaded a further 1,200 images to the online catalogue. Among them are numerous recent acquisitions, such as a coloured steel engraving of the French general Louis Alexandre Berthier (1753), who was married to a Bavarian princess and niece of King Max I Joseph. 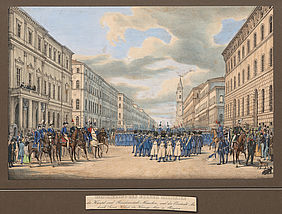 Inspection of the citizens' militia by Duke Max in Bavaria in the Ludwigstrasse, coloured lithography by Gustav Kraus of 1852 | © BSB/ Image Archive

Also well worth mentioning are a bird's eye view of Munich and a coloured lithography by Gustav Kraus, both from the year 1852. The latter shows the inspection of the citizens' militia by Duke Max in Bavaria in the Ludwigstrasse.

The database of the Image Archive now encompasses over 227,000 individual images, of which over 160,000 are linked up with digital copies.

All images can be used for scholarly and commercial purposes in line with the conditions of use of the Image Archive.