The volume continues the scholarly in-depth cataloguing of the medieval manuscripts in the German language held by the Bayerische Staatsbibliothek. The 114 codices described here were selected from the holdings with the call number group Cgm 5255 to Cgm 7000. The Old High German fragments collected under Cgm 5248 were included as well. 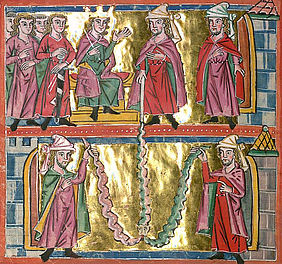 The manuscripts came to the Bayerische Staatsbibliothek on various routes. Sixty-one of them were ceded by various institutions, predominantly the Allgemeines Reichsarchiv (general Reich archive) in Munich and the district library of Regensburg, in the course of the 19th and at the beginning of the 20th century. The others were acquired predominantly through purchases in the antiquarian trade.

The majority of the manuscripts were created in the 15th century. The regions of creation of most manuscripts are the Bavarian-Austrian and the Alemannic language areas. A large number of them could be allocated to certain monasteries. The range of contents is very broad. Written documents serving for religious practice and prayer constitute a large group. A further focal point is formed by codices with texts on Bavarian history. Medical literature is present in large numbers as well. One example of a manuscript richly adorned by illuminations is Cgm 6406, the "World chronicle" of Rudolf von Ems.

Alongside the relevant holdings of the Berlin State Library – Prussian Cultural Heritage, the Austrian National Library in Vienna and the University Library of Heidelberg, the collection of German-language manuscripts of the Bayerische Staatsbibliothek Munich (Codices germanici monacenses) forms part of the world's four most important collections of this kind. Currently, the collection comprises around 13,000 codices, among them around 2,100 medieval ones.