The digital source collection "The Chernobyl Files. Declassified Documents of the Ukrainian KGB" has been acquired recently within the scope of the Specialised Information Service for Russian, East and Southeast European Studies. It makes Ukrainian and Soviet governmental documents on the nuclear disaster of Chernobyl accessible free of charge Germany-wide and at German institutes abroad. 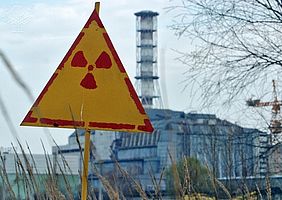 "Chernobyl" has become synonymous with a nuclear disaster on an unprecedented scale. The nuclear accident that occurred in the Soviet Republic of Ukraine in 1986 had a negative impact on man and nature in large parts of Europe. From a political point of view, the maximum credible accident and the government’s crisis management can retrospectively be seen as indications of the decline of the Soviet Union, which disintegrated five years later, as generally known.

Historiography has examined the disaster in detail in the meantime. However, important Ukrainian and overall Soviet government documents have been released for the public by Ukraine only recently. They have now been made accessible for research online in the digital collection “The Chernobyl Files”. The collection includes over 130 secret service reports and documents of the KGB, comprising more than 500 pages that can be searched in full-text mode.

The documents of the years 1971 to 1991 provide highly interesting insight into the decision-making processes of regional Ukrainian and overall Soviet governmental institutions. For example, it emerges clearly from the documents that the deficiencies of the reactor type in operation were widely known on the levels of governance. The digital source collection permits new findings about the disastrous reactor accident, also with regard to the interaction of the Soviet centers of power, the Politburo, the military command and the KGB.

The collection is available in the form of a national license and is thus freely accessible Germany-wide and also at German institutes abroad. The licensing was achieved with the support of the German Research Foundation (DFG) within the scope of the Specialised Information Service for Russian, East and Southeast European Studies at the Bayerische Staatsbibliothek.

The Chernobyl Files. Declassified Documents of the Ukrainian KGB
Further information in osmikon
Access via the Database Information System
Information on the Specialised Information Service for Russian, East and Southeast European Studies