The three newly licensed databases comprise theatre manuscripts on Shakespeare stage performances and a wide variety of source materials on the world of theatre of the 18th century and on popular entertainment of the Victorian era. 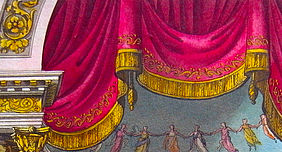 "Shakespeare in Performance" enables access to digitized theatre manuscripts of the Folger Shakespeare Library in Washington D.C. on Shakespeare performances staged in theatres in Great Britain, the United States of America and internationally between the 17th and the 20th century.

The extensive material collection "Eighteenth Century Drama" offers an insight into social life, the world of theatre and its censorship in the 18th century.

"Victorian Popular Culture" comprises a wide variety of source materials on popular entertainment in America, Great Britain and Europe in the period between 1779 and 1930 of the Victorian era.

Access to these databases is available to registered users of the Bayerische Staatsbibliothek via the Database Information System. Within the scope of the scheme of national licenses, these are accessible free of charge also Germany-wide and at German institutes abroad.