From a handwritten slip of paper of a Munich "Boazn" – a simple pub – to the elaborately printed "official menu" of a bourgeois traditional restaurant: As of now, bavarikon offers menus of Munich catering businesses from the time between 1888 and 1983. They form part of the archive materials of the large Munich breweries Löwenbräu and Paulanerbräu, which are kept at the Bavarian Economic Archive. 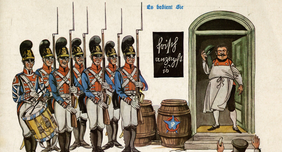 The breweries in Munich had a large number of their own restaurants, which they leased to landlords and supplied with their beer, as early as the end of the 19th century. As a rule, the breweries also influenced the design of the menus, which have therefore been preserved in large numbers in the brewery archives.

Menus fulfil the remit of informing the guest about the food on offer and the prices. They therefore provide a clear overview of the dishes that are common at different times and their price development. The text and layout of the menu also reflect the kitchen's aims and the landlord's overall concept and give a living impression of the variety of design options.