A generous donation by the association of musical artists Tonkünstlerverband Augsburg-Schwaben e. V. expands the music-historical holdings of the State and City Library Augsburg by a versatile collection of music materials by numerous musicians and composers from Augsburg and Swabia from four centuries. 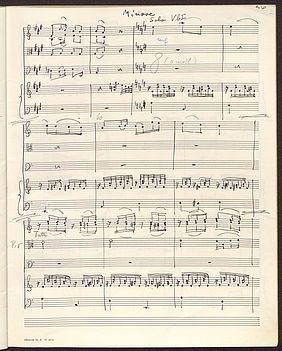 The collection includes original works, predominantly in the form of prints and manuscripts, the majority of them having served as performance materials for concerts in the region. Some of them have handwritten notes by the arrangers and musicians. Famous Augsburg citizens from the 18th/19th century can be found, such as Leopold Mozart and Friedrich Hartmann Graf, the flautist, founder of the music association and music director of all Protestant churches and cantor at St. Anna.

From the 20th century, the collection includes, for example, Gustav Heuer, who founded the "Tonkünstlerverein Augsburg" in 1919 – which is a regional association of the federal German association Deutscher Tonkünstlerverband e. V. and member organisation of the Bavarian regional Landesverband für bayerische Tonkünstler today –, Otto Jochum, Werner Egk, Arthur Piechler and, from most recent times, Fred M. Bauersachs, who was a teacher at the former Leopold Mozart conservatory for many years and head of the Collegium Musicum of the University of Augsburg.

“It’s fantastic that our internationally renowned music collection is now expanded again by regional materials!” Dr. Karl-Georg Pfändtner, Director of the State and City Library, says about the donation.

[Source: Press release of the State and City Library Augsburg of 10 December 2020