In cooperation with the Bayerische Staatsbibliothek in Munich, around 80 music manuscripts from the early times of music notation up to the middle of the 17th century from the holdings of the State and City Library Augsburg will be catalogued and digitized as of November 2020. 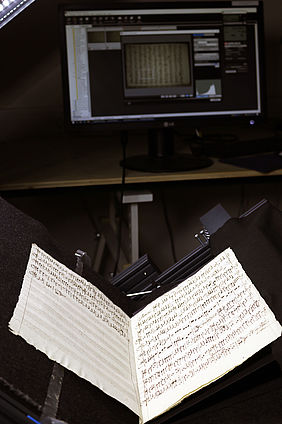 Running for the duration of two years, a project funded by the German Research Foundation (DFG) will permit the first comprehensive musicological documentation and free-of-charge provision of the sources on the Internet. In addition to online cataloguing and producing high-quality scans of the sources in their entirety, the digitization also encompasses the documentation of the watermarks contained in the paper by means of state-of-the-art thermography technology.

The music manuscripts of the State and City Library Augsburg founded in the year 1537 assume an important position among the Renaissance holdings of the city of the Fugger dynasty. They come from monasteries and colleges in Augsburg for the most part. The music materials from the former Benedictine imperial college St. Ulrich and Afra with its important collection of large-format choir books merit special mention. Among these books, there are also the Magnificat compositions by Orlando di Lasso, which are richly adorned with book illumination.

The cultural importance of Augsburg and of its citizens’ musical life during the times of Emperor Maximilian I is mirrored by the so-called "Augsburger Liederbuch" (songbook), which contains a compilation of motets, chansons and songs of the early 16th century. The volume bears the exlibris of the patrician family Herwart and conveys partly unique pieces by composers of great renown and importance at the time, such as Ludwig Senfl, Heinrich Isaac, Jacob Obrecht, Josquin Desprez, Alexander Agricola and others.

Dr. Karl Georg Pfändtner, Director of the State and City Library Augsburg: "The cooperation provides us with the opportunity to process these sources ideally for use by scholarly research and to make them accessible free of charge and in a research-friendly way from the users’ individual terminals. I appreciate in particular that our Renaissance manuscripts from Augsburg are put into their historical context with the already digitized choir books from Munich."

In the course of the project, all manuscripts are checked and restored where required by the Institute of Conservation and Restoration of the Bayerische Staatsbibliothek and in Augsburg.

"The project constitutes an important step towards the conservation and access provision of these precious cultural testaments of Bavarian history", said Director General Dr. Klaus Ceynowa, "which, as a by-product, allows us to also advance the research of watermarks thanks to state-of-the-art scanning technology. We are very grateful to the German Research Foundation for generously funding this project."

About the State and City Library Augsburg:
The State and City Library Augsburg goes back to the Augsburg City Library founded in 1537 and forms part of Germany’s important late-medieval and early-modern collections. As a regionally oriented research library for the former imperial city of Augsburg, Bavarian Swabia and the knowledge history of early modern times, it holds over 580,000 volumes, around 3,600 manuscripts, in addition 6,500 autographs, almost 2,800 incunabula, 22,000 graphic sheets and an extensive collection on Bertolt Brecht. All publications of the region are archived, and the collection is continuously complemented by acquisitions of early printed books, collections and personal papers from and about Bavarian Swabia.