As of 21 January 2019, the Bayerische Staatsbibliothek shows books, maps and globes of the 16th and 17th century in the second part of its exhibition “God, the World and Bavaria”. Titled “From the Orient and the Occident”, a number of outstanding pieces are shown, such as two globes of Gerhard Mercator, the celestial atlas of Andreas Cellarius, “De Revolutionibus” of Nicolaus Copernicus and a coat of arms of Lucas Cranach the Elder. 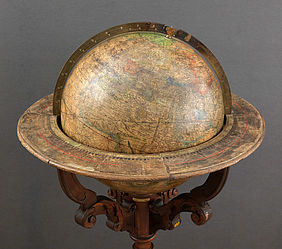 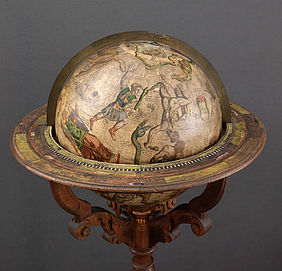 The view of the world widened at the start of the early modern age. New sea routes and unknown continents were discovered and charted in maps and globes. The fragment of a map of the world produced for the trading house of the Welser family in Augsburg in 1530 shows that the merchants were quick to understand the impact of these new discoveries. The exhibits also include splendidly designed covers of works about unfamiliar worlds and cultures from the private libraries of humanistically educated scholars and rulers. The 16th century was also a century of scientific departures: Nicolaus Copernicus’ treatise “De Revolutionibus Orbium Coelestium” about the ground-breaking finding that the sun, not the earth, is at the centre of the universe known at the time, is showcased just like the splendidly illustrated celestial atlas by Andreas Cellarius or Gerhard Mercator’s highly detailed terrestrial and celestial globes (1541).

Information about the exhibition, guided tours and the supporting programme:
www.gott-welt-bayern.de

We are looking forward to your visit!