With the support of the Literature Portal Bavaria, the Munich writer and winner of the Ingeborg-Bachmann Award Thomas Lang is writing on an interactive novel – live on the Internet at netzroman.thomaslang.net. 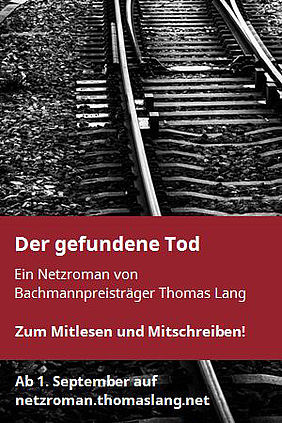 With regard to content, "Der gefundene Tod" (Coming across death) is a coming-of-age story of a darker kind. Three adolescents on a night out find a dead body in a track bed – and they maltreat the body by beating it and boast of this on social media. The people in their environment are shocked. The adolescents become increasingly isolated in the process, thus aggravating their already existing problems. The central person of the story is the girl Elle. She longs for sympathy and affection, but also for moral orientation and a recognition of her guilt.

The project started on 1 September 2016: First "building blocks" of the narration were published and have been commented by the readers. The project is intended to transport the creative process of literature to the readers' present. Preparatory work, research, drafts, reviewed versions – everything that has so far been hidden behind the finished book and has at best been known to the editors can now be made visible on the Internet. The readers can see every progress, every development and change in real time. They can comment on it, contribute their own ideas and can have an influence on the work by way of an exchange with the author.

The project has already received some praise in advance: The Deutscher Literaturfonds e. V. (German Literature Fund) supports the project with one of its highly sought-after author grants.