Karl-Georg Pfändtner, born in Bamberg in 1965, senior researcher in the Department of Manuscripts and Rare Books of the Bayerische Staatsbibliothek in Munich, has been appointed Director of the State and City Library of Augsburg as of 1 January 2017. He is the successor of Reinhard Laube, who had occupied this position since 2013. 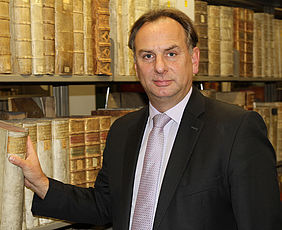 Karl-Georg Pfändtner is looking forward to directing the State and City Library of Augsburg with joy and anticipation: "I am enthusiastic about taking up the new position in a library that is one of the richest in tradition and importance in southern Germany, holding extensive collections of international significance. Of course, the implementation of the large extension building will be a special challenge, which will offer unprecedented possibilities of exploring and presenting the library's treasures. Last but not least, I am looking forward to working in the wonderful city of Augsburg."

Klaus Ceynowa, Director General of the Bayerische Staatsbibliothek: "With Dr. Karl-Georg Pfändtner, the State and City Library of Augsburg wins a director who is an outstanding scholar with comprehensive and long-term practical experience in libraries. The constructive, organisational and scholarly re-orientation of this very special library is in the best of hands with him."