Cabinet presentation in the series "Musical treasures"
2 July – 21 September 2018
On the occasion of the 100th anniversary of the death of the pianist Sofie Menter (1846 – 1918) almost fallen into oblivion today, the Music Department of the Bayerische Staatsbibliothek presents a cabinet presentation which focuses on the relationship between Sofie Menter and Franz Liszt. 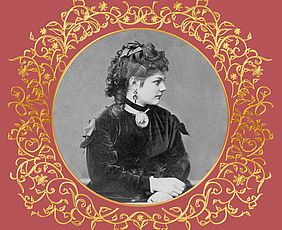 Image element of the poster on the cabinet presentation "A (not) forgotten Munich personality: The pianist Sofie Menter and Franz Liszt" | © BSB/ Image Archive

It presents numerous biographical documents, musical source materials and sheet music prints of her compositions which have been preserved solely at the Bayerische Staatsbibliothek. The presentation is rounded off by attractive illustrations.

The Munich pianist, composer and piano professor Sofie Menter (1846 – 1918) counted among the most excellent pianists of the second half of the 19th century. She went on successful concert tours throughout Europe and maintained close ties to musicians such as Franz Liszt or Peter Tchaikovsky. From 1883 to 1887 she was a professor at the Saint Petersburg Conservatory.

A special bond existed between Sofie Menter and Franz Liszt, whose works she frequently played and with whom she gave joint concerts. His piano concert no. 1 E flat major was her greatest show piece. Due to her great virtuosity, Liszt considered Sofie Menter an ideal performer of his sophisticated compositions and even planned to write a piano concert especially for her. It is frequently stated that Sofie Menter was Liszt's student. This is incorrect, however, since she already was an accomplished pianist when they met at a concert in Vienna in 1869.

The relationship between Menter and Liszt was not an exclusively musical one, though. From their liaison also a daughter emerged, whose fate had been unknown to musicology so far.