Titled "Gott, die Welt und Bayern", the Bayerische Staatsbibliothek presents one hundred highlights of the ten regional State Libraries of Bavaria in its treasure vaults from 17 October 2018 to 7 July 2019. Up to 13 January 2019, the first part of the tripartite exhibition series shows valuable medieval manuscripts and printed works up to the time of the Reformation, among them the famous World Chronicle of Hartmann Schedel or the so-called "Lorscher Arzneibuch", which forms part of the UNESCO Memory of the World Register. 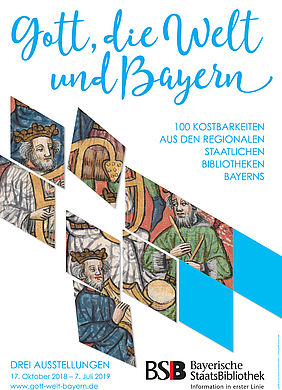 Poster of the exhibition "God, the World and Bavaria" | © BSB

Medieval manuscripts, rare incunabula, valuable printed works, maps, globes, posters and letters: The diversity of exhibits that come to Munich from the vaults of the regional State Libraries is impressive. The so-called "Lorscher Arzneibuch", a medical manuscript dating back to the 9th century, certainly forms part of the absolute highlights of the first exhibition part. The manuscript was entered in the UNESCO Memory of the World register in 2013. The exhibition also showcases a Gutenberg Bible from 1454/ 55, the famous World Chronicle of Hartmann Schedel from 1493 and the "Hexenhammer" from 1496, with a handwritten entry reporting about a burning of a witch that had been unknown so far. Every manuscript is unique in its own way and tells its own story. The exhibition takes account of the regional and supra-regional meaning and importance of the pieces, thus presenting them in their cultural-historical context.

The ten regional State Libraries of Bavaria are directly subordinated to the Bayerische Staatsbibliothek in Munich. They are the State Libraries of Amberg, Ansbach, Neuburg an der Donau, Passau and Regensburg, the Court Library Aschaffenburg, the State and City Library of Augsburg, the State Library of Bamberg, the Regional State Library Coburg and the College Library Dillingen. As academic libraries, they serve to provide their cities and regions with information and literature, and to secure, conserve and maintain valuable historical holdings. The libraries safeguard valuable manuscripts and early printed works, outstanding special collections and important collections of personal papers. As keepers and conveyors of knowledge and as the heritage institutions of "their" region, the libraries fulfil important cultural-political functions.

Prof. Dr. med. Marion Kiechle, Bavarian State Minister for Science and the Arts: "The regional State Libraries with their valuable collections represent a substantial portion of the written heritage of their regions, and accordingly of the cultural identity of Bavaria. The synopsis of 100 treasures from these libraries presented at the Bayerische Staatsbibliothek makes historical contexts visible again."

Dr. Klaus Ceynowa, Director General of the Bayerische Staatsbibliothek: "It is absolutely captivating to see the manifold treasures of our regional State Libraries all gathered in one place. To the population of Munich in particular, they convey a singular impression of the unique written cultural heritage of Bavaria that is preserved in the regions. This exhibition series showcases and honours the work of the regional State Libraries as the guardians of Bavaria's cultural diversity."

Information about the exhibition, guided tours and the supporting programme:
www.gott-welt-bayern.de

Catalogue
On the occasion of the exhibition a catalogue will be published, which can be purchased for € 19 (sales price on site, at the exhibition). With the kind support of the association Förderer und Freunde der Bayerischen Staatsbibliothek e. V.