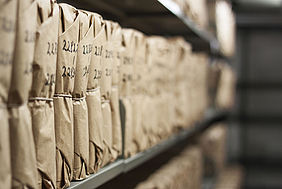 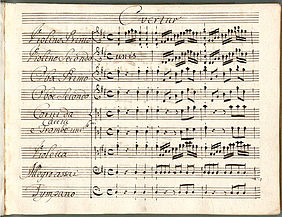 During the three-year project term (2017 – 2019) that has started now, the indexing and digitization of the historical archive of the publishing house "B. Schott's Söhne" from Mainz will be started. The archive could be purchased in 2014 together with the Berlin State Library, thanks to the commitment of numerous further sponsors. In the Bayerische Staatsbibliothek, 40 printed and engraved books from the company archive, historical letters and music manuscripts from the area of the vault archive, the holdings of source books of the production archive (spanning the time between around 1780 and 1840) and the archive of first editions will be secured with respect to their conservation state, catalogued and – provided that they are in the public domain – digitized. Further, it is planned to develop a joint online portal for the presentation and discovery of all continuously produced catalogue entries and digitized materials from the Schott archive. The portal will be available as a presentation platform to all eight research institutions taking part that have also acquired parts of the Schott archive. The Berlin State Library will develop this portal during the current project phase.

The handwritten opera scores of the 18th century held by the Bayerische Staatsbibliothek, a collection of more than 200 works in over 400 volumes, will be catalogued, digitized and made available on the Internet within the framework of a further three-year project, likewise funded by the DFG. The extensive holdings of handwritten scores of composers such as Pietro Torri and Andrea Bernasconi, which are immediately associated with performances in Munich, form a significant core area of the collection. The collection has been expanded continuously by the addition of materials from personal estates and collections and by targeted purchases. The digitization and structured online provision of the opera scores of the 18th century will make these unique works accessible to music researchers and practitioners.