Within the framework of an event on 4 December 2019, the Bayerische Staatsbibliothek has restituted 203 illegally acquired books from its holdings to the German Masonic Museum in Bayreuth in the presence of Minister of Sciences Bernd Sibler. The library thus continues its endeavours started in 2003 to return NS loot to its original owners or their heirs or legal successors. 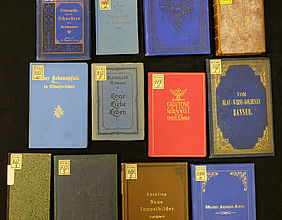 Bayerische Staatsbibliothek hands over 203 books to the German Masonic Museum in Bayreuth | © BSB/ U. Rehusch 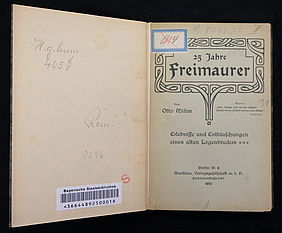 During the years 1937/ 38 the Bayerische Staatsbibliothek took over 450 titles of Masonic literature in an exchange with the SS school Haus Wewelsburg. The transaction included the swap of double copies of the BSB against books from libraries of Freemasons’ lodges, which had been seized between 1933 and 1936. These undoubtedly constituted NS loot.

201 of the books do not have any further marks of provenance other than a "swap/ donor number". Despite extensive research, the search for former lodges or current legal successors yielded no results. In these cases, the German Masonic Museum acts as a center for pooling book holdings of the lodges disowned in 1933.

Two further works formerly belonged to the Grand Lodge "zur Sonne" in Bayreuth. After its forced dissolution in 1933, the lodge was reactivated as Grand Lodge "zur Sonne für Bayern" in 1948. In 1949 it was merged with today’s "Großloge der Alten Freien und Angenommenen Maurer von Deutschland" (Grand Lodge of the Old Free and Adopted Masons of Germany). The German Masonic Museum indirectly also acts as the legal successor of the Grand Lodge zur Sonne.

Dr. Klaus Ceynowa, Director General of the Bayerische Staatsbibliothek: "With this further public restitution of stolen books, the library faces up to its responsibility for its involvement in NS injustice. The library will continue to vigorously pursue its efforts in provenance research. In a next step following the holdings of printed works, it is planned to examine the manuscripts and music materials acquired after 1933 and evaluate them to this effect. This will take place with the support of the German Lost Art Foundation and the Bavarian State Ministry for Sciences and the Arts."

Minister of the Arts Bernd Sibler emphasised: "Provenance research is a fundamental task of our cultural institutions. Of course, the Bayerische Staatsbibliothek also faces up to this duty and responsibility. We cannot undo the injustice that has been done. But we can take the clear, visible stance that this must never happen again and can substantiate our firm resolution to work through the injustice of the past transparently by acting accordingly. It is a matter of course to me that cultural goods dispossessed due to persecution by the NS regime are restituted."

The Bayerische Staatsbibliothek has been searching actively for NS loot among its collections since 2003: Thus, the Thomas Mann Archive in Zurich received 78 volumes from the library of the writer and laureate of the Nobel Prize for literature in 2007. The support by the German Lost Art Foundation has made a big contribution to the progress of research and speedy restitution of items. In 2015, for example, the Plock pontifical, the oldest Polish pontifical, could be returned to the Catholic Church in Poland. Together with the Directorate General of the Bavarian State Archives, 44 works were restituted to the descendants of the Munich orientalist Prof. Karl Süßheim in 2017.