The former Director of the State Library of Bamberg, Professor Dr. Bernhard Schemmel, has been awarded the Cross of the Order of Merit of the Federal Republic of Germany for his outstanding services. On 18 December 2017, Bernd Sibler, State Secretary in the Bavarian Ministry of Education and Culture, Science and the Arts, awarded the great distinction to Bernhard Schemmel in Munich. 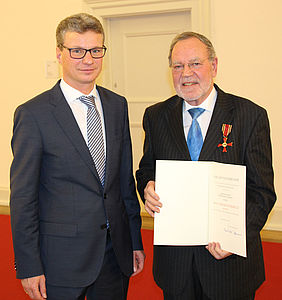 Professor Dr. Bernhard Schemmel (born in 1940) was the Director of the State Library of Bamberg from 1984 up to his entering into pension, and additionally the Acting Director of the Regional State Library Coburg from 1991 to 1992. State Secretary Sibler honoured Schemmel's services to the State Library of Bamberg: "You have made a substantial contribution to the State Library of Bamberg's development into one of the most commendable and user-friendly research libraries in Bavaria. You have decisively furthered endeavours such as the cataloguing of manuscript illuminations." Bernhard Schemmel was the initiator of the major project funded by the German Research Foundation now running for over twenty years, within whose framework manuscripts with book illuminations and printed works of the State Library of Bamberg have been described in terms of art history in accordance with current scholarly standards, and opened up for further research in the process. The descriptions of the manuscripts from the 8th to the 14th century have already been published. The project results are made available in the form of a printed catalogue and online, via the manuscript database Manuscripta Mediaevalia.

The University of Bamberg, State Secretary Sibler continued his laudatory speech, had appointed Schemmel honorary professor for the cultural and literary history of Franconia for his teaching activities at the university. Schemmel showed his great interest in the Franconian culture by his commitment to various associations, such as the "Association of Franconian History", the "European Danse Macabre Association" or also the "E.T.A. Hoffmann Society“. From 1999 to 2016, Schemmel was its Chairman and (since 2010) President, with him being in office as Managing Director since 2017. "You are responsible for issuing the E.T.A. Hoffmann yearbooks and also for managing the E.T.A. Hoffmann house in Bamberg", said Sibler. "It is owed to your never tiring commitment that the former residence of Hoffmann – the only one still preserved in Germany – has become a modern museum of literature and a cultural meeting place today."

The colleagues at the State Library of Bamberg congratulate Bernhard Schemmel very cordially on this award!