From 20 September 2017 to 7 January 2018, the Bayerische Staatsbibliothek presents the book as an autonomous work of art, forming the center of its exhibition "SHOWCASE – Artists' books from the collection of the Bayerische Staatsbibliothek". The exhibition illustrates impressively the enormous differences between the artists' approaches to using the book as a form of expression. The works on display reach from the historical avant-gardes of the 20th century to conceptual artists' books of the 1960s and 1970s, and up to the present. 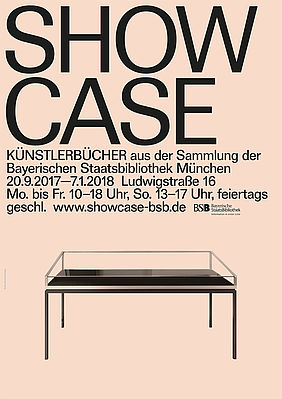 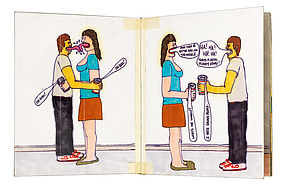 The first room is dedicated predominantly to small-format works. Here, typographic experiments, photo compositions, dadaistic and surrealistic books are shown among other things. The works run the gamut from William Blake, the "godfather of the artist's book", with the only specimen of Song of Los present in Germany, to works by Kazimir Malevich, Marcel Broodthaers and Ed Ruscha, Max Ernst or Andy Warhol, up to Joan Miró and Joseph Beuys.

Large-format and elaborately produced artists' books, created predominantly during the 1990s and 2000s, i.a. by Louise Bourgeois, Marina Abramović, Anselm Kiefer, Chuck Close and the Munich artist Katharina Gaenssler, can be viewed in the second room.

The third room is dominated by "flatware": Leporellos, portfolio works, a scroll, a record cover and posters. Here, works with a socio-political objective can be found, such as Pablo Picasso's portfolio of the year 1937 against Franco and the war or Art Spiegelman's original work Maus, for which he was awarded the Pulitzer Prize in 1992. The large bandwidth and topicality of the artist's book is also exemplified by a portfolio by Keith Haring, an artist's booklet by Raymond Pettibon, zines by Mike Kelley and the Französische Bilder by the artist group Bazooka.

Minister of State Dr. Ludwig Spaenle emphasises: "The Bayerische Staatsbibliothek is renowned on a national and international level for its comprehensive collection of artists' books. It stands out for a great diversity of high-carat exhibits, thus enriching the Bavarian cultural scene. With the exhibition 'Showcase' the Bayerische Staatsbibliothek effectively focuses on this particular form of expression of contemporary art, presenting artists' publications in all their splendour."

"The artists' books", says Dr. Klaus Ceynowa, Director General of the Bayerische Staatsbibliothek, "are a very special collection of our institution that is unique in Germany. For once, the book does not serve as a carrier of information, but becomes an object itself – in the medium of art."

Virtual preview (with all further information about the exhibition on site)
http://www.showcase-bsb.de