During the period from 2017 to 2021, the Bayerische Staatsbibliothek will be supported by the Carl Friedrich von Siemens Foundation with EUR 180,000 annually for the acquisition of printed books from the field of philosophy. 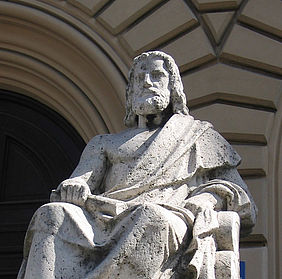 These special funds will put the Bayerische Staatsbibliothek in a position to close the provision gap which has opened Germany-wide since 2013 in the wake of the abolition of the former special collection field of philosophy of the German Research Foundation (DFG).

As a result of a programme evaluation, the DFG had subjected its library support programme to a fundamental structural change at the end of 2012: The joint system of special collection areas that had been well-coordinated for six decades was converted into a project funding scheme and replaced by "Fachinformationsdienste für die Wissenschaft" (specialised information services for scholarship and science, FID). After the failure of the conversion of the former special collection area of philosophy into a specialised information service in the year 2013, literature on philosophy was no longer collected comprehensively and centrally in Germany.

The Bayerische Staatsbibliothek has now agreed to further expand its well-maintained philosophy collection with the support of the Carl Friedrich von Siemens Foundation, to be able to satisfy the needs of cutting-edge research also in this discipline in the future. In addition to the funding in the amount of EUR 180,000 provided annually by the foundation, the Bayerische Staatsbibliothek itself will continue spending EUR 100,000 out of its own budget for the collection annually.

The support by the foundation is based on the expectation that an appropriate public funding of the collection area of philosophy can be ensured again after the five-year period.