As a result of a four-year DFG project, an online database has now been made accessible on Western and Central-Asian adorned and luxurious book bindings and covers from the holdings of the Bayerische Staatsbibliothek. 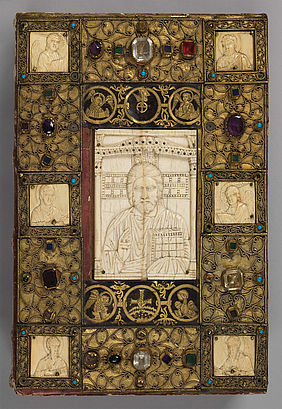 Adorned binding of a gospel book from Wessobrunn | © BSB/ Clm 22021 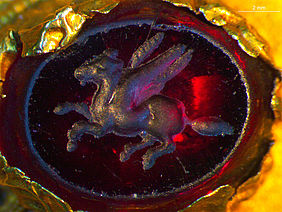 As plastic objects of art, book bindings assume a special position between the text-oriented collections of libraries and the object-related collections of museums. Splendidly designed with precious stones, pearls, ivory or enamel on embossed gold or silver, the goldwork bindings of the Middle Ages in particular, which adorn liturgical manuscripts and form part of the most outstanding pieces of plastic art of their time, are associated with the classical collection material of museums.

One particular characteristic of this genre of art and a challenge for its description is to also take account of other, partly considerably older works of art in the form of spolia, which were removed from their original context, partly disassembled and incorporated prominently into the newly designed book binding. In addition to Arabic amulet stones, Byzantine enamels, antique gems, cameos and intaglios, ivory reliefs merit special mention, which were used in numerous examples of the 10th to the 12th century, as well as historical silk and velvet fabrics.

Many of the adorned bindings simultaneously show the close connections between religious communities and high-ranking donors: For example, there are the magnificent book donations with which Emperor Henry II provided the bishopric of Bamberg founded by him, and which form part of the UNESCO world heritage today, or presents from bishops or aristocrats to Bavarian monasteries.

The collection of medieval European metal bindings held by the Bayerische Staatsbibliothek is of outstanding quality and quantity both in international comparison and within Germany. It is still continuously expanded by important new acquisitions.

Manuscripts of important religious texts of Buddhism were handled in this cultural area by wrapping the book block in the landscape format in a cloth, placing the wrapped block between covers and holding these together by winding a strap around. Covers that were artistically carved from wood or embossed in copper plate, partly gilded or painted, were also created for ceremonial events. In the cultural and artistic heritage of Tibet, these covers are as important as Thankas (scroll paintings on silk) or sculptures. While their origin thus goes back to the book culture of Tibet, they are also associated with painting and sculpting to the same degree, due to their artistic design.

Many covers have been preserved without the associated manuscript and are collected by libraries and museums in this form. The degree of wear of some three-dimensional elements on these covers permits the conclusion that the book covers themselves became cult objects. Including over 100 Tibetan book covers, the collection of the Bayerische Staatsbibliothek represents the largest collection of this kind outside of Tibet. The covers of Tibetan manuscripts and block prints are not only from Tibet, but also from Mongolia and China.

A corpus of 59 Western adorned bindings of the Middle Ages and the modern era and 96 Tibetan book covers from the collections of the Bayerische Staatsbibliothek has been used within the framework of a DFG project as the basis for developing a modular standard for describing these independent objects of art. In an accompanying, camera-based workflow, the objects were digitized taking account of the results of the cataloguing and a standard sequence for recording this class of objects was developed. Selected objects from both collections were additionally analysed by the Institute of Conservation (IBR) of the Bayerische Staatsbibliothek, applying material-scientific and art-technological methods for the exclusively contactless and non-destructive determination of colorants, metals and gemstones.

In close connection with the applied digitization technology, a model was developed for the Internet presentation of the art-historical descriptions, the digital recordings of the artefact itself and of material-scientific and art-technological primary research data. This presentation clearly shows the added value of now being able to connect text-related in-depth cataloguing and digital versions of the artefact itself. The availability of primary research data and their analysis in particular also offer new approaches and possibilities of further use for research in the digital age. All project results are published in the open access format and made available for download.