Using the English-language manuscript Cod.angl. 2 as an example, the Bayerische Staatsbibliothek demonstrates the innovative features of the technology of the International Image Interoperability Framework (IIIF, pronounced as "triple I F") in a pilot project: In the digitized image, the text of the handwritten logbook entries from the 16th century is laid over the image accurately, and can thus be read line by line in modern script (transcript). 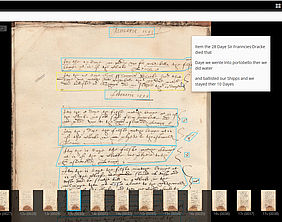 The manuscript Cod.angl. 2 forms part of the most important English-language manuscripts of the Bayerische Staatsbibliothek. It contains writings and letters relating to English seafaring from the 16th and 17th century. The manuscript starts with a logbook of the last journey of the English circumnavigator Sir Francis Drake (around 1540 – 1596).

The entries span the period from 28 August 1595 to 10 May 1596 and, day by day, describe the course of one of the ships taking part in Drake’s last expedition to the West Indies. Special events and the distance covered are recorded as well. On the top of sheet 13v, the date of the death of Sir Francis Drake is noted, 28 January 1596.

The digitized manuscript is now made available in compliance with the IIIF standard and via the so-called Mirador viewer. In order to make the manuscript readable, transcriptions are added in the form of digital annotations to the logbook entries, which are hard to decipher. By moving the mouse pointer into one of the frames, the text of the respectively framed section becomes visible line by line.

The International Image Interoperability Framework (IIIF) was created in 2011 with the support of the Mellon Foundation, on the basis of a worldwide common initiative of renowned heritage institutions (archives, libraries, museums). The Bayerische Staatsbibliothek has been an active member of this international consortium since 2015. IIIF permits an unprecedented free exchange of digitized cultural heritage between various institutions. In this manner, for example, users can have manuscripts provided in digital form by different institutions all displayed on one desktop.

Direct link to the annotated logbook
Presentation in the Digital Collections