Having cooperated productively already for a long time, the Literature Portal Bavaria and the Literaturhaus Munich have now become cooperation partners also officially. The goal of the cooperation is primarily the exchange of information and contents for mutual use and broader public awareness, as well as to sound out where conceptual intersections and common areas of emphasis exist, calling for commonly organised events. 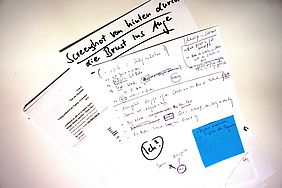 The Literature Portal Bavaria thoroughly analyses the exhibitions taking place in the Literaturhaus and in turn makes suggestions for possible contents of conferences and seminars. The conference "Screenshots" last December on the topic of literature on the Internet has been a first sample of this cooperation. The Literature Portal Bavaria introduced the services offered on its platform in a paper, connecting it at the same time with a virtual game of reality and fiction.