On 6 March 2007 the Bayerische Staatsbibliothek in Munich, the then Bavarian Minister of Sciences Dr. Thomas Goppel and Google announced that the library was going to join Google's book search project. In cooperation with the Internet corporation, the copyright-free holdings of the library, focusing on works from the 17th to the end of the 19th century, were to be digitized – an important milestone in the digitization strategy of the Bayerische Staatsbibliothek. 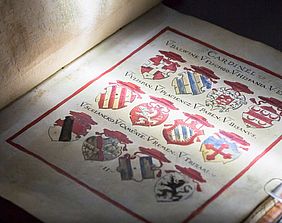 After developing and establishing a complex work flow, the digitization work finally started at the beginning of 2008. Over one million copyright-free books found their way to the web in this manner. In 2014, the main part of the work had been accomplished – the volumes were available to everybody, around the clock and regardless of location.

Today, ten years later, the Bayerische Staatsbibliothek offers over two million volumes online, thus holding the largest digital data stock of all German libraries. The project has been expanded in the meantime, also including holdings of the state libraries in Regensburg, Passau and Augsburg, which are subordinated organisationally to the Bayerische Staatsbibliothek.

On the occasion of the tenth anniversary of the cooperation, a virtual exhibition gives a small and varied – if certainly not representative – insight into the holdings digitized by Google. We hope you enjoy exploring and discovering the world of old books.

Virtual exhibition
Books to the web