The Specialised Information Service for Russian, East and Southeast European Studies has acquired two new source collections with so far unpublished or not readily accessible materials on the resistance against the German occupation of Belarus during the Second World War. 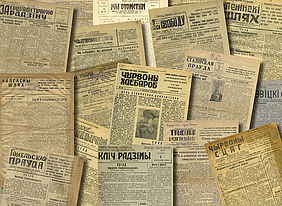 The collection "Belarus Anti-Fascist Resistance Leaflets 1942 – 1944" comprises a total of 97 single-page up to four-page flyers, mostly in the Belorussian language, which address the Belorussian people in its entirety or individual important groups of the society in a targeted manner.

The collection "Belarus Anti-Fascist Resistance Press 1942 – 1945" contains 30 newspaper titles, with 10 to 20 issues per title, which were published at irregular intervals in the Belorussian or Russian language.

To learn more about this, please read the blog post in OstBib.
OstBib