The Bayerische Staatsbibliothek has been presented with a beautiful gold-ruby glass cup from private ownership as a supplement to the personal estate of the classical philologist Friedrich Wilhelm von Thiersch (1784 – 1860). Thiersch had received the cup on the occasion of the 50th anniversary of his doctorate. 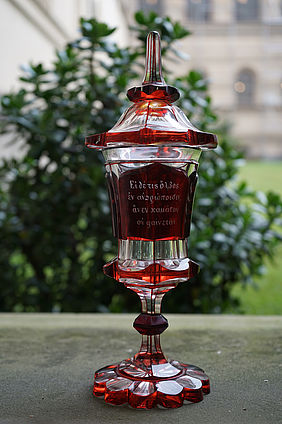 Friedrich Wilhelm von Thiersch (1784 – 1860) is considered the founder of classical philology in Bavaria, was the private tutor of the five daughters of Max I and later was a member of the group of scholars around King Ludwig I and King Maximilian II. He supported the reform of schools and universities and negotiated the enthronement of Otto von Wittelsbach as the king of Greece. Thiersch was descended from an important family, from which many artists and scholars came.

(Best wishes to the jubilee doctor.)

(Pindar, 12th Pythian ode, English: "But if there be any bliss among men, without labour it is not made manifest", meaning that even if you are blessed with fortune you will have to work hard.)

Gold-ruby glasses were very popular from the end of the 17th century to the end of the 19th century, and the cup is a particularly splendid specimen. It was handed to the Division of Personal Papers of the Department of Manuscripts and Rare Books of the Bayerische Staatsbibliothek by Dr. Elke Michel-Blagrave, who had received it from private ownership.

Thus, a further item has been added to enrich the personal estate of Friedrich Wilhelm von Thiersch (call number: Thierschiana I). With regard to content, Thiersch's personal papers form part of the most important collections of the 19th century. In 38 boxes, there are: manuscripts of his works and of lectures, collection of extracts from various works, personal items and materials on the history of his life, diaries and letters from and to Friedrich Wilhelm von Thiersch.