This week, the Bayerische Staatsbibliothek restituted a book to Professor Rudolf Cohen, thus continuing its endeavours started in 2003 to return books which had been acquired illegally during the time of the Nazi regime to their owners. 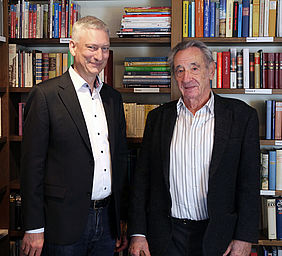 Professor Dr. Rudolf Cohen [third from the left] in the presence of friends and staff members of the Bayerische Staatsbibliothek working on the project NS loot on the occasion of the restitution on 13 March 2018 | © BSB/ T. Dimitriadis

The work "Civilrechtsfälle ohne Entscheidungen. Zum akademischen Gebrauch bearbeitet und herausgegeben von Rudolf von Ihering" ("Civil-law cases without rulings. Processed for academic use and edited by Rudolf von Ihering."), published in 1888, was found among the holdings of the Bayerische Staatsbibliothek. A stamp in the book indicates the Jewish attorney Alexander Dünkelsbühler (1875 – 1935) from Munich as its owner. Dünkelsbühler's heiress was his Jewish partner Elisabeth Heims, who appointed her friend Annemarie Cohen single heiress in her testament in 1940. In the summer of 1941 Ms. Heims was detailed by the Gestapo to work as a forced labourer at the flax-processing company in Lohhof, and was deported to Kaunas and murdered in November 1941.

On 13 March Dr. Stephan Kellner of the Bayerische Staatsbibliothek handed the work to Rudolf Cohen (in the presence of friends and staff members working on the project NS loot).

Detailed information on the search for Nazi loot at the Bayerische Staatsbibliothek:
https://www.bsb-muenchen.de/ns-raubgutforschung/