The Bayerische Staatsbibliothek acquires an extensive collection of partisan prints, predominantly from the region of today's Slovenia. The library thus complements its holdings by adding first-class sources on the South-East European and German history during the Second World War. 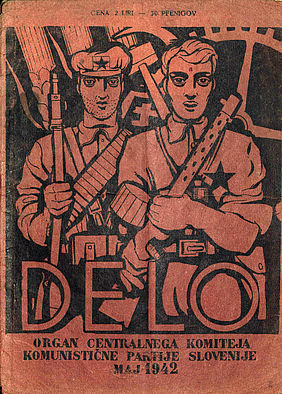 Journal of the Central Committee of the Communist Party of Slovenia "Delo", number 2 of May 1942 | © BSB

The collection includes around 300 brochures, posters, flyers, maps and newspapers from the years 1943 to 1945. Many of them were produced in underground print shops of the Slovenian partisans; some are of Serbian and Croatian origin. In addition, there are a number of prints from liberated prisoner-of-war camps from this region, German and Italian collaboration and propaganda documents of the years 1941 to 1944, as well as writings by Slovenian post-war exiles in Austria (1946 to 1948).

The works were produced mostly in small print runs, part of them being very rare and at the same time noteworthy in regard of both printing technology and art. Such a contiguous and comprehensive collection is unique outside of the former territory of Yugoslavia.

Dr. Klaus Ceynowa, Director General of the Bayerische Staatsbibliothek: "With the newly acquired collection of partisan prints, we offer materials on a topic that has met with particular interest in the western world as of late. The value of the collection is outstanding."