Elector Karl Theodor (reigned 1777 – 1799) decided on 18 December 1789 to have his Munich court library "opened for use by all and sundry ... without distinction of class or status ... for the promotion of scholarship". The princely book collection was on its way to a state institution; its opening constituted a milestone for the public. 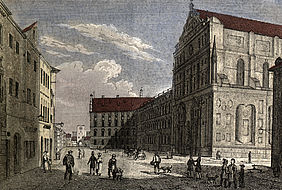 Court library in the Wilhelminum next to the church of St. Michael in 1789 | © BSB/ Image Archive

As of this day, the library could be used for research purposes for five hours on working days, during scheduled opening hours. There were three heated reading rooms equipped with writing utensils, which were located in the Wilhelminum, the Old Academy next to the church of St. Michael in the Neuhausergasse.