Manuscripts, printed works, handwritten drafts and letters: In the cultural portal bavarikon, over 300 digital copies from the holdings of the Bayerische Staatsbibliothek have been published. The new bavarikon collection "Literatur in Bayern" ("literature in Bavaria") contains literary treasures from twelve centuries, which are related to Bavaria with regard to their origin, tradition and impact, and which have gone down in history. 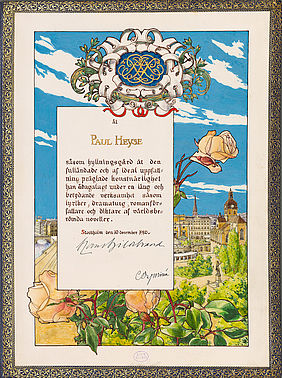 Among them there are, for example, the Wessobrunn prayer, the oldest preserved item of Christian poetry in alliterative verses, written in Bavarian written language, a paper manuscript by Jean Paul (1763 – 1825) containing a number of chapters of his last larger work "Selina oder über die Unsterblichkeit der Seele" ("Selina or on the immortality of the soul"), or a farewell letter of the Bavarian writer Lena Christ (1881 – 1920), dated 29 June 1920, one day before she committed suicide on the Waldfriedhof cemetery in Munich.

The 300 digital copies also encompass around 100 priceless autographs, valuable unique copies from the holdings of the Bayerische Staatsbibliothek, written by authors of non-Bavarian origin. For bavarikon, letters of Philipp Melanchthon (1497 – 1560), Lev Tolstoy (1828 – 1910), Gotthold Ephraim Lessing (1729 – 1781) or Benjamin Franklin (1706 – 1790) have been digitized, among other things.

To the bavarikon collection "Literatur in Bayern"