According to most recent findings, the Bavarian State Library’s broadside of globe gores by Martin Waldseemüller (BSB call number Mapp. I,5 ua) is not an authentic print but a copy, probably produced before 1960, of the document in possession of the University of Minnesota. This is the conclusion based on the results of a thorough materials science examination conducted by the Bavarian State Library’s Institute of Conservation and Restoration. The print, thus far dated from the year 1507, is one of only six known copies. The Waldseemüller map is famous for being the first to use the name "America". 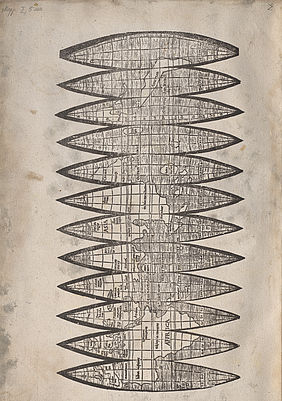 The Bavarian State Library acquired the globe gores in 1990 from the widow of renowned US-American dealer-collector H. P. Kraus. (She died in 2003.) The map is bound into an early printed book, specifically into an incunable of Claudius Ptolemy’s "Cosmographia" which was published in 1486 and which contains numerous maps. (BSB call number 2 Inc.c.a. 1820 a). H. P. Kraus himself, who died in 1988, had acquired this volume at a Sotheby’s London auction in 1960.

The book’s provenance can be traced back to the 17th century. It was in the possession of the von Maltzan family. The previous owner was the Muscovite collector Sergej A. Sobolevskij (1803 – 1870). He had acquired the incunable from Count Christian Ernst zu Stolberg-Wernigerode (1691 – 1771). This provenance history was once again reviewed and verified in 2005. Corresponding bookplates to indicate previous owners (ex-libris) can be found on the incunable’s inside front cover.

The book’s acquisition by the Bavarian State Library took place in 1990 according to the customary rules and principles of the time. The map’s authenticity was at no time doubted by anyone. Specialist expertise emphasized the object’s significance and assessed it in terms of its place in the Bavarian State Library’s exceptional collection of historic maps. The buying price for this significant incunable including the globe gores print was 2,000,000 Deutschmark. The purchase was made possible by substantial third-party funding.

Suspicions of forgery only emerged when the news broke that a newly-found original print was to be sold at Christie’s London in combination with the accessibility of high-resolution images available on the internet today. Beforehand, Christie’s compared this sixth now known copy of the globe gores, currently for sale at auction (Lot. 97: estimated price 690,000 – 1,000,000 Euro), with the Bavarian State Library’s copy. It was found that the two prints are identical in every detail which implies that they are based on the same print template.

Only when experts expressed doubts about the authenticity of the Waldseemüller map for sale at auction at Christie’s was it compared to the one in possession of the University of Minnesota. This comparison strengthened the suspicion of forgery for the Christie’s map which, in effect, now had to be extended to the map in possession of the Bavarian State Library. In consequence, the Bavarian State Library critically reviewed the authenticity of its own map. Unfortunately, this materials science examination by the State Library’s Institute of Conservation and Restoration – the first such examination of a globe gores print altogether – has led to the conclusion that this map, too, is a forgery.

The Institute of Conservation and Restoration examined the broadside of the globe gores without physical sampling. The map’s paper features the characteristic laid structure of historic laid paper but without a watermark which otherwise could provide an indication regarding the region and time of the paper’s production. Therefore, the examination focused on an analysis of the used printing ink. For this purpose, the Institute of Conservation and Restoration employed non-intrusive spectroscopic techniques.

The map’s printing ink’s main components are the elements iron and titanium. With this combination of elements, several mineral compounds of natural or synthetic origin come into consideration for black pigments. It is probable that the mineral pigment iron titanate is present. The use of a titanium-bearing pigment for the printing ink suggests that the map was manufactured in the first half of the 20th century. Based on our current state of knowledge, printing ink which contains carbon black was used exclusively during Martin Waldseemüller’s era at the beginning of the 16th century and until the beginning of the 20th century. Whilst examining the map in order to answer the question of its authenticity, the existence of carbon black was verified in the text portions of "Cosmographia". The presence of carbon black as a black pigment on a carbon basis was not verified for the globe gores map. This result of the analysis precludes the Bavarian State Library’s copy from being a print from the Waldseemüller era. Rather, it is a much more recent copy. The purely visibly recognizable characteristics of the printed image of the map prepared for auction at Christie’s, currently made public in the international press, are also to be found in the Bavarian State Library’s map. This suggests that both maps were manufactured at the same time and by using the same printing process. Comparative analyses would shed more light on the matter.

The Bavarian State Library will now carefully consider to what extent legal claims can be asserted regarding the forgery.