On account of the war of aggression waged by the Russian Federation against Ukraine and the immeasurable suffering that the Russian government is bringing to a peaceful, democratic country, the Bayerische Staatsbibliothek, the Leibniz Institute for East and Southeast European Studies and the Berlin State Library – Prussian Cultural Heritage suspend their cooperation with the Russian Presidential Library as from today. 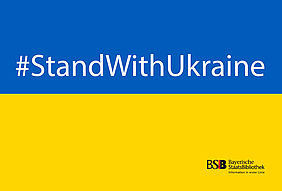 We deeply regret having to take this step. Our institutions consider academic and cultural cooperation on an international level as essential, in particular also between countries with tense political relationships. Fruitful relationships with partners in Russia have therefore been of great importance to us. However, cooperation is impossible with institutions which are under the direct control of a warmongering government. The Presidential Library is primarily concerned with the history of Russian statehood. Since 24 February 2022, this term has been synonymous with imperialism, war and breaching international law.

The interest and esteem of our institutions are directed not only to the rich Russian culture and history, but equally also to the culture and history of Ukraine, whose right of existence is now being negated and whose culture is massively threatened by the Russian war of aggression. We thank the Russian Presidential Library for its cooperation in the past years. At the same time, we express our hope that a more peaceful and freer future will permit taking up cooperation again at some point.