A few weeks ago, the Bayerische Staatsbibliothek received the so-called 100-sheet map of the Russian empire ("Stolistovaya") as a present from private ownership. Consisting of 107 sheets, the work published in Saint Petersburg from 1801 to 1804 constitutes the first multi-sheet, official map of Russia and accordingly a central source of Russian cartography in the 19th century. 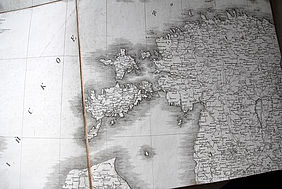 It is an important document of the territorialisation of the tsardom and an example of knowledge transfer from western Europe. The two cartographers Jan Pieter van Suchtelen (1751 – 1836) and Karl Ludwig Oppermann (1766 – 1831) had studied mathematics in Groningen and Gießen before entering the Russian military service in 1783. As of 1797 the military was in charge of official cartography, and the 100-sheet map was thus published by the military's map depot.

The cartographic work formed part of the library of Eugène Beauharnais, the son in law of King Max I of Bavaria. His important library was accommodated in the Palais Leuchtenberg in Munich (today's location of the Ministry of Finance) up to 1852, and later on in the monastery of Seeon. Between 1928 and 1970 it was sold at several auctions in Switzerland and Germany and thus scattered to the four winds. In 1970 the map's previous owner, a resident of northern Germany, bought the work at an auction in Stuttgart and has given it to the Bayerische Staatsbibliothek as a present now. The map has thus returned to Munich after over 150 years.

The map collection of the Bayerische Staatsbibliothek currently encompasses more than 400,000 printed maps, among them over 90,000 from the time before 1850 (so-called "Altkarten", old maps).

To the map collection