"It is not sufficient for a library to be merely a feast for the eyes, it has to function, too." (Dr. Gustav Hofmann, Director General from 1948 to 1966): On 27 October 1966, the annex of the Bayerische Staatsbibliothek was inaugurated. In the course of the years, the interior of the glass building has been adapted to current requirements again and again. 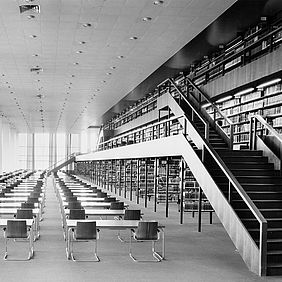 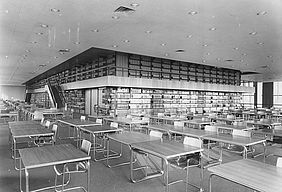 Today, the building houses the light-flooded General Reading Room with 636 work desks, the Periodicals Reading Room and the book-processing Departments of Acquisition, Collection Development and Cataloguing and User Services. The work desks in the reading room are more sought after than ever: On average, the General Reading Room has a visitor turnover of around 2,600 per day, and particularly in the run-up to university term breaks and examinations all seats are already taken in the early morning.

The reconstruction after the destructions of the Second World War had six construction phases and took 25 years. In Ludwigstrasse, operations could be taken up only in 1952, after a lengthy return of the relocated holdings. However, users and employees still had to put up with interim solutions for many years.

In 1966, the annex, designed by the group of architects Hans Döllgast, Sep Ruf and Helmut Kirsten, and the east wing of which only the outer walls had remained at the end of the war, were finished. In 1970 the reconstruction was finally concluded with the inauguration of the south wing that had been destroyed completely during the war.

During the years 1995 to 2004, the building in Ludwigstrasse was refurbished completely, the costs amounting to almost € 40 million. The renovation had become necessary since unsuitable materials had been used in many cases in the reconstruction after the Second World War, modern safety standards were fulfilled only insufficiently, and since only scarce funds had been available for building maintenance during the 1970s and 1980s. Asbestos removal, modernisation of the air conditioning system, replacement of the book conveyor system and the installation of optical-fibre wiring in the complete building were some milestones in the course of renovation, which could be accomplished while day-to-day operations continued unrestrictedly. The completely modernised General Reading Room could be opened in 1997, the Periodicals Reading Room in 1999. The end of the refurbishment was marked by the reconstruction of the outside facilities and the set-up of a new signposting and guidance system in 2004.