The 17th of January 2017 marks the 500th anniversary of the Italian composer Antonio Scandello. From Bergamo, his place of birth, his musical career first took him to Trent in 1547, and two years later he followed the invitation by Elector Maurice of Saxony to the Saxon court music ensemble in Dresden, which he directed as of 1568 up to his death. 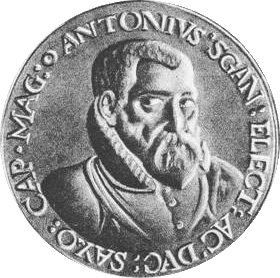 His work mirrors both influences by Italian composing practise and, with regard to movements, also references to cultural centers north of the Alps. While the preserved masses and motets are associated rather with the Franco-Flemish tradition of composition, the texture of his songs and his oratory works in particular bear witness to the musical language of Italian masters.

The Bayerische Staatsbibliothek holds historical prints and contemporary copies of Scandello's works. Among them are documents evidencing his most important works, such as the St. John Passion or the history of resurrection. The latter work already points to one of his famous successors in Dresden: Heinrich Schütz (1585 – 1672).