Over 1.9 million digitized volumes, the largest fleet of scanners of all German cultural institutions, innovation projects such as the image-based similarity search, the newspaper portal digiPress, apps, 3D digitization, new presentation systems for digital contents, cooperation projects with Google, the Stanford University Libraries or the Fraunhofer Society and much more mark the digitization strategy of the Bayerische Staatsbibliothek in Munich. The library now celebrates the 20th anniversary of its Munich Digitization Center (MDZ). 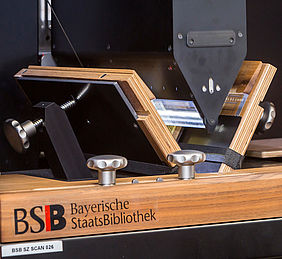 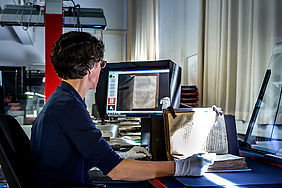 Founded in 1997 in the form of a digitization division of the library with the financial support of the German Research Foundation, today the MDZ is the central library institution for developing, testing and launching new, innovative products, services and processes in the broad field of the "digital library".

In the course of the past 20 years, the Bayerische Staatsbibliothek has digitized a total of over 1.9 million volumes from its collections in over 500 projects, corresponding to a data volume of almost 700 terabytes. Among other things, scanning robots are used for this purpose. With 27 different scanning systems and cameras, the MDZ has the largest scanner fleet of all German cultural institutions.

The library makes the digitized holdings available online to its users all over the world via the library catalogue and the Digital Collections. Search tools and services developed by the MDZ, such as the image-based similarity search, digiPress or online services such as the cultural portal bavarikon and the Literature Portal Bavaria, offer reliable and targeted support to users doing research.

A further important topic to which the MDZ has dedicated itself since the outset is the digital long-term archiving of the digital copies and data produced. The library cooperates closely with the Leibniz Supercomputing Centre of the Free State of Bavaria in this field.

Director General Klaus Ceynowa: "It is a library's mission to make knowledge available to everybody as quickly as possible – preferably at any time and in any place. We can do justice to this demand with our digital services. In addition to the digitization of our collections, the focus of our work is now particularly on the expedient processing of the produced digital contents for highly diverse use scenarios – as defined by our role as a service provider for research. The MDZ plays a central role in this context."

The anniversary of the Munich Digitization Center will be celebrated in a ceremonial act taking place in the Bayerische Staatsbibliothek on the evening of Tuesday, 27 June 2017.